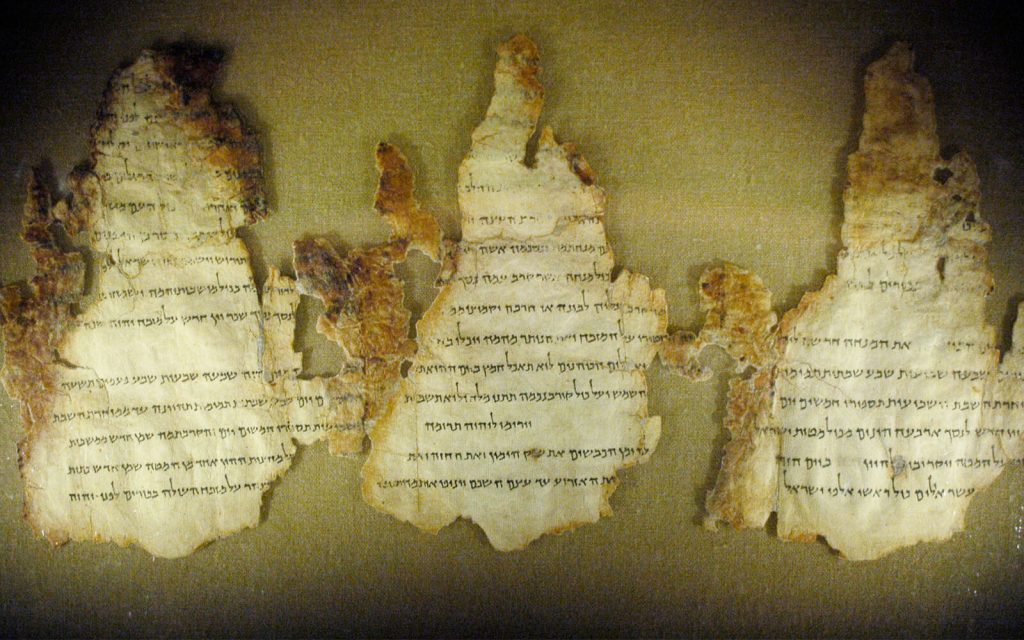 The first of the Dead Sea Scroll discoveries occurred in 1947 in Qumran, a village situated about twenty miles east of Jerusalem on the northwest shore of the Dead Sea. A young Bedouin shepherd, following a goat that had gone astray, tossed a rock into one of the caves along the seacliffs and heard a cracking sound: the rock had hit a ceramic pot containing leather and papyrus scrolls that were later determined to be nearly twenty centuries old. Ten years and many searches later, eleven caves around the Dead Sea were found to contain tens of thousands of scroll fragments dating from the third century B.C. to A.D. 68 and representing an estimated eight hundred separate works.

The Dead Sea Scrolls comprise a vast collection of Jewish documents written in Hebrew, Aramaic, and Greek, and encompassing many subjects and literary styles. They include manuscripts or fragments of every book in the Hebrew Bible except the Book of Esther, all of them created nearly one thousand years earlier than any previously known biblical manuscripts. The scrolls also contain the earliest existing biblical commentary, on the Book of Habakkuk, and many other writings, among them religious works pertaining to Jewish sects of the time

The legends of what was contained in the Dead Sea Scrolls are far beyond what was actually there. There were no lost books of the Bible or other literature that there was not already other copies of. The vast majority of the Dead Sea Scrolls were simply copies of books of the Old Testament from 250-150 B.C. A copy or portion of nearly every Old Testament book was found in Qumran. There were extra-biblical and apocryphal books found as well, but again, the vast majority of the scrolls were copies of the Hebrew Old Testament. The Dead Sea Scrolls were such an amazing discovery in that the scrolls were in excellent condition and had remained hidden for so long (over 2000 years). The Dead Sea Scrolls can also give us confidence in the reliability of the Old Testament manuscripts since there were minimal differences between the manuscripts that had previously been discovered and those that were found in Qumran. Clearly this is a testament to the way God has preserved His Word down through the centuries, protecting it from extinction and guarding it against significant error.